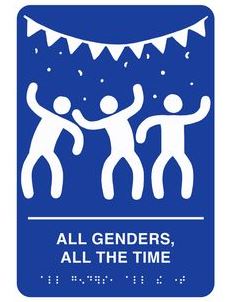 NBC News reported on findings that transgender and gender-nonbinary youth were more likely to experience sexual harassment and assault if their school did not let them use bathrooms and locker rooms corresponding with their gender identity. Thirty-five percent (35%) of students experiencing this discrimination at school had been sexually assaulted or harassed compared to 26% of those who had been permitted access to facilities.

A new study found that as same-sex marriage was implemented across the U.S., same-sex couples were increasingly likely to have both partners employed, and having full-time employment. In total, the author estimates that 160,000 people may have gained employment through cultural and opportunity changes that came with marriage equality.

Ed Source reported that the California State Board of Education has approved new health education guidance for teachers that is more LGBTQ-inclusive and scientifically-based. California could now be a leader on inclusive health curricula, although the sexual health components did prove controversial among those who oppose comprehensive education.

ScienceAlert reported on a new study which found high levels of sexual orientation fluidity in adults (especially women) through their twenties. The author suggests that simplistic labels like “gay,” “bisexual,” and “straight” do not truly capture the experience of the large percentage of the population who experiment or question their orientation before settling more permanently.

Healio reported on a new viewpoint piece in JAMA Dermatology that advised dermatologists on how they can contribute to gender-affirming care, specifically through hair reduction services. The authors note that such services are hard to access for many transgender people due to limited coverage by insurance, a lack of transgender healthcare protections, and limited research.

Reuters reported on a landmark study of 1,000 same sex, HIV-serodifferent, male couples. Findings demonstrated that persons living with HIV, who followed an HIV treatment regimen, did not transmit the virus to their partners, even without using condoms. The report was heralded by organizations such as UNAIDS, which said the results should decrease stigma and encourage early testing and treatment.

The American Academy of Family Physicians called for more inclusion of LGBT health issues in medical education and residencies. They said that gender-affirming care services, in particular, “are in the scope of family physicians without specialist consult based on informed consent and patient-centered care models.” Supporters highlighted that transgender people should be able to receive all of their standard care “under one roof” and not have to search for a second doctor for their trans-related care needs.

A new study found complex disparities related to bisexual youth, when broken down by race and ethnicity. For example, black bisexual youth were actually less at risk for several issues relating to mental health, substance use, and bullying than white bisexual youth. The results suggest the need for varied interventions to support the diversity of the bisexual community.

Researchers examined the motivations and barriers of transgender and genderqueer people, assigned female at birth,  in seeking Pap tests, which screen for cervical cancer. The main facilitating factor was their relationship with a provider, while major barriers included the availability of competent care, distress they experienced in seeking sexual health services, and characteristics of the health care setting.

HRC observed Mental Health Awareness Month, which takes place in May. The goal is to reduce stigma byencouraging more discussions about mental health, especially with LGBTQ youth. HRC noted that while the LGBT community in general is more impacted by mental health issues, subpopulations such as bisexual youth, gender-nonconforming folks, and LGBT people of color are at particularly high risk.

CNBC reported that the FDA approved iQOS – a heated tobacco product – for sale in the U.S. Philip Morris International also requested that the FDA deem the product “safer than cigarettes,” a decision the agency has yet to make. LGBT adults and youth are already disproportionately impacted by other tobacco products.