DYK: Some LB Women Use Marijuana More Than Straight Women? 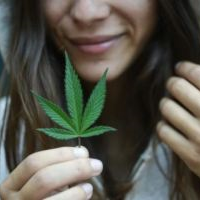 Queer Women Face PTSD Challenges A new study found that sexual minority PTSD survivors were more likely to use cannabis products and had higher severity of PTSD than their heterosexual counterparts. LGBTQ Nation explored the implications of the study for the queer community.

Healthcare Professionals and Discrimination USA Today reported on a transgender nurse who won a case in Iowa after being denied access to the bathroom that matched his gender identity. Meanwhile, Forbes explored new research finding rampant discrimination against female doctors, with one study showing that 58% of female surgeons were sexually harassed in the last year alone.

Gender-neutral HPV Vaccines Would Work A Swedish study explored the cost effectiveness of making HPV vaccination programs gender-neutral. Programs in Sweden, like their U.S. counterparts, have targeted adolescent girls and left out m boys (including queer male adolescents, who face high risk). They found that vaccinating all youth would indeed prevent HPV-related cancer, save lives, and be cost-effective.

Psychiatry and Queer Women Experts published a history of mental health treatment for women in England, and found that such treatment was far less documented than treatment for men, which was centered around aversion therapy (for those who were not jailed for breaking laws against male same-sex relations). They found a mix of positive and negative treatment, which they say still today affects the perception of mental healthcare in the LGBT community.

How Laws Impact HIV, Health UNAIDS launched a new campaign to mark March 1st as “Zero Discrimination Day,” which acknowledges the way that discriminatory laws contribute to stigma and thus exacerbate the spread of HIV. This role of stigma and discrimination also helps explain why many marginalized groups, such as LGBT people and people of color, face higher risk of HIV transmission.

A Public Health Response to Hate Harvard School of Public Health produced an hour-long program on addressing the spread of hate and racism in particular as a public health crisis. In addition to examining the rise in hate crimes, they also looked at the role of the internet and the impact of the rapid spread of hateful messages as potentially impacting the mental health of millions.

Fighting Cancer with Communication Researchers found that among sexual minority women, the quality of patient-provider communication and trust in providers were positively associated with patient intention to receive cervical cancer screenings, and that these factors mediated the negative impact of perceived discrimination. This means improving patient-provider relationships could improve cancer screening outcomes for sexual minorities.

LGBTQ Youth Face Housing, Foster Care Issues Researchers in California found that 30.4% of youth living in foster care and 25.3% of unstably housed youth identify as LGBTQ, despite only comprising about 11.2% of the overall youth population. They also faced disparities such as poorer mental health and higher substance use for unstably housed LGBTQ youth, and more fights in school and more mental health problems for LGBTQ foster youth, when compared with non-LGBTQpeers.

Body Image Study Launches Australian Broadcasting Corporation reported on a new worldwide study being driven by Grindr that will examine body image issues among queer men. Researchers say that there is reason to believe that gay and bisexual men are at risk for body issue problems, eating disorders, steroid use, and more, but that more study is needed – making this new initiative promising.

Transphobia Needs Targeting in Medical Education A new study found that providers’ self-reported knowledge about transgender care was associated with whether or not they had transphobic attitudes, but not with the amount of formal or informal education they had received on the subject. The authors say that this means increased training is not enough, unless it addresses transphobia and implicit bias that providers may have.

States Take On Bullying The Sacramento Bee reported on proposed legislation in California that would fund school districts to have annual trainings designed to combat anti-LGBT bullying, which experts say contributes to mental health disparities. Meanwhile, the Providence Journal explored research and activism in Rhode Island on reducing bullying against transgender students in particular.

Women of Color and Mental Health WTOP and Johns Hopkins explored how women of color can take charge of their mental health, for which they say Black women are about half as likely to seek help as are White women. They share tips like getting good rest, exercising, and knowing one’s limits, as well as fighting back against stigma and finding competent help in a field lacking in racial dive